Another review in Oxford's NIGHTSHIFT Magazine... 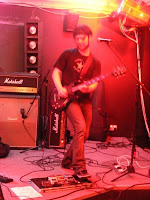 The Mighty PISTOL KIXX got another review in NIGHTSHIFT the oxford music mag.
There was also of a review of gig we played at, but the reviewer got there after we played, or was so appalled by us he omitted us!
Either way we missed another mention.
All good fun though.
The text of the review in the October 2008 issue went as follows:

PISTOL KIXX
This month’s obligatory….well, Pistol Kixx
demo. Since this
is their third offering in the
last few months. In fact this demo
was recorded at Keynote Studios as the band’s
prize for winning Demo Of
The Month earlier in the year. These blokes don’t mess about,you
know: “Recorded with the help of cheap
booze”, shouts their scrawled
letter. “More of the same!” it pronounces, and they ain’t
wrong. But then why fix what ain’t broke?
What’s broke, by the way, is probably all
the furniture in the studio and anything else that
isn’t made of concrete or girders. So
anyway,`Backdoor Beauty’ is a simple Oi! punk
thrash fronted by a gruff
B&H rasp, while `City Sniff’ is, well,
more of the same. Two songs,
five minutes, wham bang thank you mam.
They won an entire day’s recording for that
previous Demo Of The Month so to come out with five minutes of music suggests the
cheap booze took up most of the
time. Admirable behaviour in every respect.
People take notice: this is
how proper rock bands
should sound and
behave.

Somebody there get's it anyhow. Now if we can just convince the rest of the world...

Posted by Rob Silver at 2:21 PM No comments: 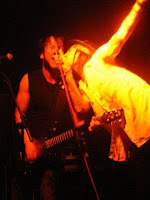 Just a quick one. I just got some live footage from the gig at the Bullingdon Arms last weekend.
We had a really cool night, had a few drinks and it was a blast playing ona decent stage.
There were a few alchohol induced fuck ups, but all round it was pretty cool.
It seemed a lot less rock n roll when I had to get back to London and sleep for 4 hours and go to work, but what can you do!

A great night anyway.
The video footage is of a track called "WILD WEST" great guitar solo and even some guitar behind the head action!

The video player seems a bit temperemental, so if it won't play in the blog, click HERE and it should open up for you ina new window.

Posted by Rob Silver at 2:01 PM No comments: